Turkey made its debut on the Formula One calendar in 2005 with an all-new purpose-built circuit in Istanbul. The spectacular 5.378 kilometer track is designed by famed German architect Herman Tilke, the man behind Sepang, Bahrain and Shanghai, and features 14 turns – eight lefts and six rights –.

The Istanbul Park is located on the Asian side of Istanbul, approximately 90 kms from the centre of Istanbul.

Impressive spectator facilities can easily pursuit the very high standards set by Bahrain and China in 2004. The seating capacity is 155,000, with 25,000 of those in the main grandstand, and parking is available for 20,000 cars. Dominating the circuit’s skyline are the two seven-floor VIP towers built at either end of the paddock. 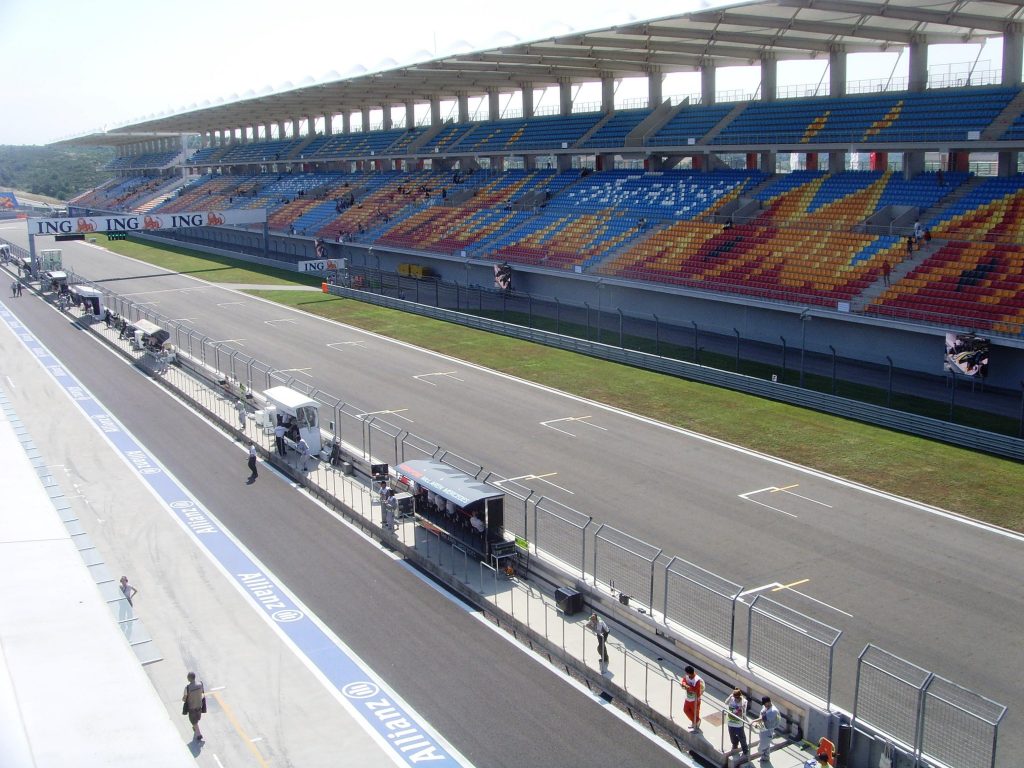 The 5,333km Istanbul Park circuit was constructed during 2005 and an unusual feature of Istanbul Park is that the racing cars run in an anti-clockwise direction around the circuit, making the Turkish Grand Prix only the third race on the F1 Grand Prix calendar to do so (San Marino and Brazil being the other two). It possesses a wide variety of corners, and it definitely provided the drivers with real challenge in 2005.

Before considering the most appropriate category that best suits your 2020 Turkish Grand Prix ticket needs, it is important to consider the location and benefits of the available grandstand and general admission tickets. We suggest that you refer to the above Istanbul Speed Park circuit map (click on map for larger view), to further assist you in making the best possible choice.

Istanbul Park currently has a total capacity for 125,000 spectators, which are accommodated in 10 grandstands and 3 unnumbered and grassed general admission areas. All grandstand seats are numbered and except the main grandstand, all are uncovered. In general the safety fencing protecting the uncovered grandstands are higher than normal and tends to spoil your view to a certain extend, so its is important to book your seats as high as possible. Good disabled facilities including wheelchair access are provided for on the lower main grandstand. There are sufficient toilets and catering facilities all around the circuit. There is opportunity to buy F1 team and other merchandise at the F1 Village located behind the Main Grandstand.

The Istanbul Park’s Main Grandstand is located on the Pits Straight directly opposite the start/finish line and pitboxes. It presents you with an excellent view of the Pits Straight, including the build-up to and the start of the race, the chequered flag at the finish of the race, as well as a view of the racing teams and their pit activities. The western side of the grandstand is situated opposite the podium, offering you great views of the podium celebrations after the race. The start line is located towards the middle of the grandstand. The F1 Village is also located behind this grandstand, which is easily accessible from this grandstand. Three bigscreen TV’s are located along this great grandstand, enabling you to follow the entire race and not loose track of the procedures.

This is a newly built grandstand right near the main grandstand and it offers views of the Start/Finish line and Turns 13 and 14, the last turns before the Finish line. Open air and numbered seating.

Silver 1 is located on the outside of the first corner a fast 900 lefthander. The racing cars reach about 305kph on the Pits Straight before the brake for this difficult downhill corner, which features a blind apex. Only the southern section of Tribune 1 will give you a view down the Pits Straight. Book your ticket as high as possible on the stand, to ensure that you do not end up sitting behind the safety fencing. Provided you are seated in the southern section of the grandstand it will offer you good viewing of the last part of the Pits Straight, the first corner as well as a section of the second corner. The stand also offers you good views of the pitlane exit and the F1 Village is easily accessible from this stand. A bigscreen TV is located opposite the grandstand and which for obvious reasons make the entire F1 Grand Prix so much more enjoyable.

This uncovered grandstand is located in one of the hilliest sections of the circuit and offers you views of corners 3, 4, 5 and 6 as well as some impressive track gradients. The circuit drops slightly into corner 3, a fast lefthander and then drops steeply into corner 4 (a tight 100kph second right-hander) and all the way down to corner 5 a tight 120kph 2nd gear left-hander. The circuit then flattens out into turn 6, a very fast left-hander, which is usually taken just about flat-out. It is a good idea to sit as high as possible on the grandstand, which is located within walking distance of the F1 Village. Grandstand 2 also features a bigscreen, which intensifies the drama and magnifies the action on other parts of the circuit.

The Tribune 3 is located just after Turn 6, a fast left-hander. Tribune 3 offers you good views of turns 4, 5 and 6, as described for grandstand 2 above (although from a different angle). It is once again a good idea to sit as high as possible and the grandstand is also located within walking distance of the F1 Village. A bigscreen TV is located opposite this grandstand, which enables you to follow the entire race and not loose track of the procedures.

The Tribune 4 is located on the exit of the now infamous turn 8. This corner is actually made up of four apexes, leading onto a short downhill straight. The corner entry is banked and approached under rather bumpy braking and the outside kerbs close in on this tightening bend. This 250kph 5th gear corner is described by the drivers as the most difficult of the circuit, which was definitely confirmed by the number of racing cars which tested the run-off areas of this challenging corner during last year’s Grand Prix event. This grandstand is a long walk from the F1 Village, but the circuit’s free shuttle bus is also available as an easier alternative. The grandstand features a bigscreen TV, which for obvious reasons makes your entire Grand Prix so much more enjoyable.

Tribune 5 is located at the end of a short downhill straight, on the entry to Turns 9 and 10 and provides good views of the 110kph 2nd gear chicane. This tricky chicane is approached downhill at a speed of about 320kph – and the combination of a downhill approach and heavy braking does tend to upset the cars’ composures, as the weight shifts forward from both the braking and gradient – unloading the rear tyres and inducing regular and spectacular oversteering situations. This chicane usually provides for some good overtaking moves under braking. This grandstand is a long walk from the F1 Village, but the circuit’s free shuttle bus is available as an easier alternative. The action and excitement of the whole race can however be followed on the bigscreen positioned directly opposite this grandstand.

The Tribune 6 is located at the exit of the Turn 9 and 10 chicane and will offer you a similar view as described for Grandstand 5 above (although from a different angle). If you do not want the high safety fences to spoil your view, it may a good idea to book your seats high up as possible on the grandstand. This grandstand is a long walk from the F1 Village, but the circuit’s free shuttle bus is also available as an easier alternative. A bigscreen TV is visible from this stand, enabling you to follow the entire race and not loose track of the procedures.

Tribune 7 is located at the end of the back straight just before Turn 12, the fastest section on the circuit where the cars reach speeds of about 330kph. Turn 12 a 95kph 2nd gear lefthander, is also the slowest corner on the circuit, requiring extreme braking into this corner and normally providing for some good passing opportunities. Tribune 7 offers you good views of the back straight, Turns 12, 13 and 14 as well as a short section into the Pits Straight. It is the best to book your seating as high as possible on the stand, which is also located within walking distance of the F1 Village. The grandstand features a bigscreen TV, which for obvious reasons makes your entire Grand Prix so much more enjoyable.

Tribune 8 will offer you a similar view as described for Tribune 7 above, although from a different angle. The stand offers easy access to the F1 Village but your seating position is important – for the best view down the Pits Straight it is important to book your seat as high up the stand as possible and on the south-eastern section of the stand. The action and excitement of the whole race can however be followed on the bigscreen positioned directly opposite this grandstand.

Overall the three general admission areas, provide for excellent viewing and offer good value for money admission. The Istanbul Park is a naturally hilly circuit featuring a variety of steep mounds, which makes the viewing in the general admission areas good. But as always there are no seats and you must be there early to get a good spot, which you stand to loose should you have to visit a toilet or leave to buy food. Do not forget to bring a small folding-chair to sit on.

In terms of good photographic opportunities, the best grandstand is probably Main Grandstand Gold 1 as low as possible and as close as possible to Turn 1. This grandstand is reasonably close to the circuit and provides excellent photographic opportunities of the cars braking into Turn 1. Alternatively the Main Grandstand Platinum and Gold 2 will provide you with numerous good pits and start line scenes, but cars roaring down the Pits Straight at nearly 300 kph, makes good photographic shots more problematic. Please note however that Platinum, which is lower than Gold 3, does not provide you with an unobstructed view into the pitbox areas. Unfortunately for most of the other grandstands, your view is compromised to a certain extend by the unusually high safety fencing.

The F1 Village is located directly behind the Main Grandstand area. Team, circuit and other fan merchandise are on sale within this area as well as some interesting displays from the tire manufacturers and other F1 related suppliers. The village is accessible from every grandstand or general admission area, with the use of the free shuttle bus service around the circuit. The organizers provide free Shuttle Bus services for the duration of the weekend. This free shuttle bus service runs continuously around the Istanbul Park and the shuttles stop for drop-offs and pick-ups at every gate and grandstand. At the end of the race on Sunday this service can however become unreliable and a bit chaotic.

The organizers provide for a selection of food and beverages, at various outlets located around all the grandstand and general admission areas. The quality of the food is good and prices vary from $ 3,50 for soft drinks, $4.50 for beer, $ 4,50 for hamburgers, hotdogs and shwarmas and up to $. 8,00 for barbequed lamb dishes etc.